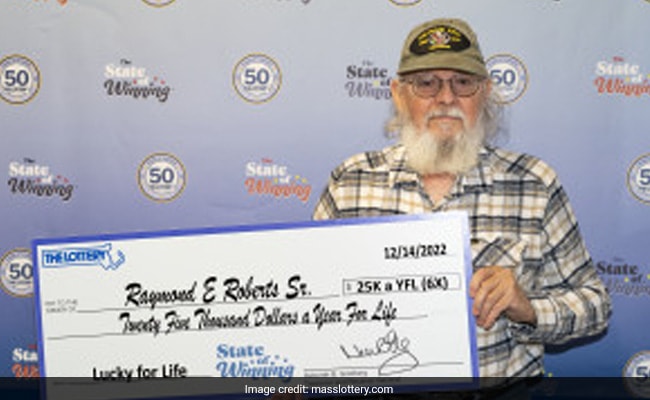 Raymond Roberts Sr. won the lottery six times, saying his “intuition” helped him do so.

A man in the United States has credited his “intuition” after winning not one, but six state lotteries for a total prize of over $2 million.

Raymond Roberts Sr., a Vietnam veteran, won the $25,000 a year for life prizes in the December 14 drawing, according to the state lottery, which stated that he won the lotteries after he matched the first five numbers on each ticket. He revealed that his major win was the result of a gut feeling. He told the lottery officials that his “intuition” led him to purchase multiple tickets which were all with the same numbers.

“Roberts cited “intuition” as his reason for purchasing multiple tickets with the same numbers. The numbers are a combination of anniversary dates and birthdays that he has been playing in multiple draw games for over 20 years,” the press note released by the state lottery read.

The combination earned him millions of dollars. When he picked up his prizes, he opted for a $390,000 cash option for five of his winning tickets. For the sixth ticket, he chose the annuity option, which promises him payments of $25,000 before taxes for at least 20 years. In total, as per the state lottery, Mr Robert has won more than $2 million before taxes.

The man didn’t reveal all his plans for the money, but he did say that will buy a motorcycle for himself.

The store where Mr Roberts bought the winning tickets has received a total of $30,000 in bonuses from the state lottery, the press release said.

Meanwhile, last month, a man who believed that “lotteries are a waste of time and money” ended up winning a prize of $150,000 (approximately Rs 1.22 crore). Danny Johnson was pressured into buying the lottery ticket by one of his friends. He kept urging Mr Johnson to buy the ticket, citing the huge prize money others have won in jackpots. The Hampton, Virginia, resident finally agreed to buy a ticket and his fortune then turned around and he won huge prize money.

Featured Video Of The Day