As you wait with baited breath for your lottery numbers to be called out, spare a thought for the people who took part in England’s first state lottery in the 16th century. Seen as an ideal solution to fund much-needed port infrastructure and investment in the English Navy, Elizabeth I gave the go-ahead for a harebrained scheme to sell lottery tickets. The prizes even included the Elizabethan-era equivalent of a get out of jail free card.

While the accession of Elizabeth I had been welcomed in 1558, the Catholic threat in Europe began to take its toll. Dependent as the economy was on the cloth trade which made up two-thirds of England’s exports, Elizabeth had to put the country, and especially England’s coastline, ports and fleet, in order to stave of any Catholic invasion and invest in sea trade with the New World.

Such a project was going to require vast funds. Brainchild of Sir William Cecil, her Secretary of State, the lottery seemed like just the ticket. The idea itself wasn’t new, and the Low Countries (now known as the Netherlands) had been having success using a lottery system in order to fund infrastructure projects.

In 2010, a curious artifact came up for auction in London. It was a two-page letter to Sir John Spencer, written by Queen Elizabeth I herself, with clear instructions on the sale of 400,000 lots costing 10 shillings a piece. This “rich lotterie general” was promoted on posters throughout London from August 1567, and soon tickets were available in a project aimed to raise funds for “the reparation of the Havens, and strength of the Realme, and towardes such other publique good workes.” 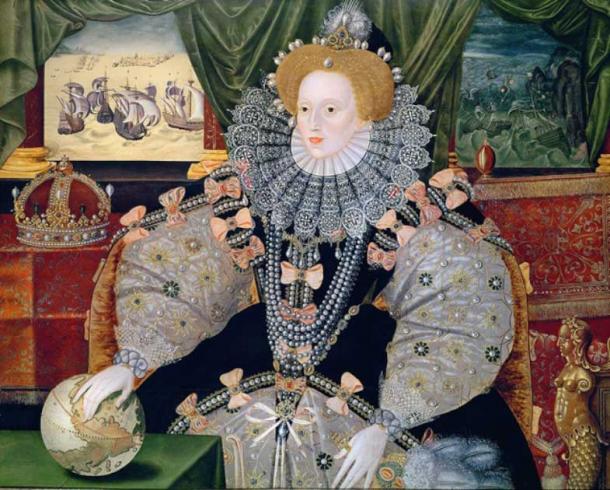 George Gower’s Armada Portrait of Elizabeth I circa 1588. ( Public domain )

Despite the tempting prizes, including a first prize of £5,000 (“£850,000 in today’s money,” according to The Daily Mail ), the hefty ticket price and general skepticism excluded most people from taking part. As an added incentive, Elizabeth threw in temporary immunity from arrest for crimes (excluding piracy, murder, felonies or treason).

Unfortunately, the enterprise was not a success. Despite an Elizabethan-style marketing campaign, under ten percent of the lots were sold, and the draw ended up being postponed by royal proclamation until January 1569.

When it finally did take place, outside of the old St. Paul’s Cathedral in London, the entire process was said to have taken four months due to the complex nature of calculating the reduced prizes and the cryptic method of identifying winners; participants wrote playful remarks, some of them anti-Catholic, in order to keep their identity a secret. “In God I hope and a far for the Pope,” was one, while another desperate entrant wrote “God send a good lot for my children and me, which have had 20 by one wife truly.”

Elizabeth never held another lottery. She ended up getting an emergency loan to rebuild ports, while work to de-silt and modernize Dover harbor was funded by tavern licenses.