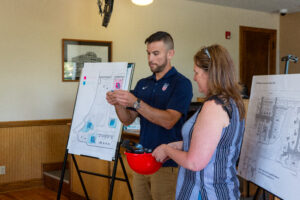 Gunnison Mayor Diego Plata reached his hand into a red hat to grab the winning ticket. Those in a room were silent as they waited to hear if the day had finally arrived when they would become Gunnison Valley homeowners.

On July 22, the Gunnison Valley Regional Housing Authority, in partnership with the City of Gunnison, held its second lottery for the Lazy K affordable housing development in West Gunnison. Of the 65 units planned for the Lazy K project, located on West Tomichi Avenue, across the street from the Gunnison Valley Health Senior Care Center, 44 will be deed-restricted to give low-income residents a chance to become homeowners.

The three two-bedroom cabins offered during the lottery are priced at approximately $268,000 and were restricted to buyers with an income at or below about $49,600 for a one-person household or about $57,000 for two. The fourth unit was priced at $427,000 and was available for a local business to purchase and use as employee housing, or to a local employee. At 140%, eligible individuals needed to have an income at or below $86,800 for a one person household, $99,120 for two people.

The Housing Authority received a total of 15 applications from prospective homeowners for four units within the development. Ten residents qualified for the 80% AMI units, and two qualified for a 140% AMI unit, one of which was Gunnison Valley Hospital. This lottery had nearly twice as many qualified applicants than the first, which took place at the end of December, 2021.

“It’s great to see that more people are getting involved and realizing that they can own a home for an affordable price,” said GVRH Interim Director Chris Peterson.

Three alternates were also picked in the case any winning applicants drop out. Those who were not selected in the drawing will be automatically entered into the next lottery, which will include four 80% AMI units and two at 120%. The lottery is scheduled for Nov. 4.

GVRHA will accept applications until Oct. 21. To learn more about the application process visit gvrha.org.

Nashville strip club owners buy $5K in lottery tickets, plan to give back to community if they win