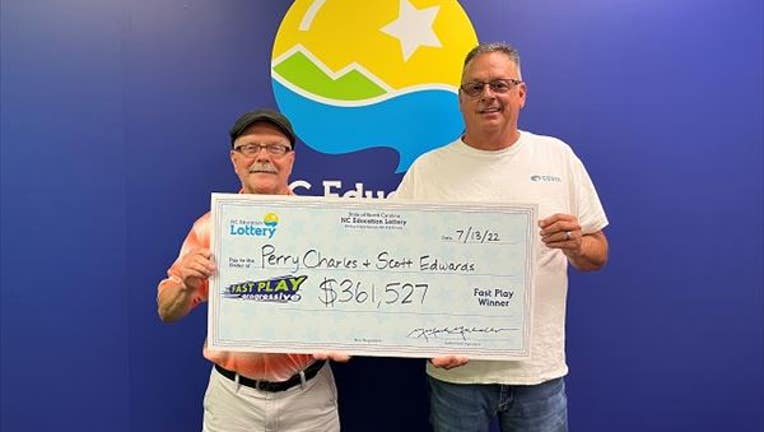 RALEIGH, N.C. – A long time ago, Scott Edwards made a pact with his friend Perry Charles that they would split any big lottery wins with each other.

Charles kept his word when he won a $361,527 Fast Play jackpot Tuesday in North Carolina.

“I’d just gotten off of work,” Charles said in a news release from NC Education Lottery. “I looked at the amount you could win and thought to myself, ‘Man, I want this!’”

Charles waited to see to get home to see if he had won. He then called Edwards.

What are the odds you win the lottery?

What are the odds you win the lottery? You’re more likely to be struck by lightning.

“I was lost for words,” Edwards said. “I was kind of in shock too because to me that’s a lot of money to win. And I know that anything he says is just the truth. So, I knew when he told me that he wasn’t pulling my leg.”

Lottery officials said the two men have known each other for more than 35 years. They met while working at a local grocery store. Edwards said Charles was his boss.

“We always talked about if we would hit something big, it didn’t matter if we went in together to get the ticket or if we got it separate, we were gonna share it with each other,” Edwards said.

“He’s what you call a true friend,” Edwards continued.  “Kinda like family.”

The two men collected their prize Wednesday and received $128,361 after federal and state tax withholdings.

Both men told lottery officials they plan on paying bills.

This story was reported from Los Angeles.