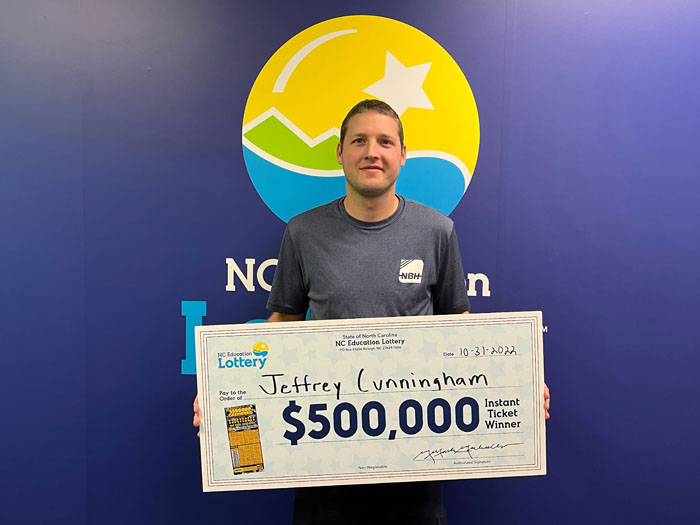 RALEIGH — When Jeffrey Cunningham of China Grove started a commotion at work, his startled co-workers witnessed a man who had just won half a million dollars on a lottery ticket.

“I was scratching it at work and then I just started hollering,” Cunningham said. “Everyone rushed in, asking me what happened.”

Cunningham, a logistics manager, said he initially didn’t realize how much he won on his $500,000 Cashword scratch-off.

“I kept getting more and more of the letters, but I missed one of them at first,” he said. “I went back and checked again, and that’s when I saw it.”

Cunningham bought his lucky $10 ticket from Rose Mart BP on South Elm Eugene Street in Greensboro. He claimed his prize Monday at lottery headquarters in Raleigh and, after required federal and state tax withholdings, took home $355,053.

“This is definitely life-changing for me,” Cunningham said.

He said he will use his winnings to pay some bills and pay for a trip to Italy next year with his family.

Ticket sales from scratch-off games make it possible for the lottery to raise more than $2.5 million a day on average for education. For details on how $7.4 million raised by the lottery made a difference in Rowan County in 2021, go to www.nclottery.com and click on the “Impact” section.

Housing Lottery Launches for 1686 Weeks Avenue in Claremont, The Bronx